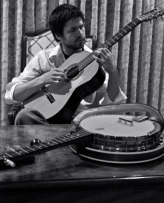 NAHUM SMITH
Nahum* has been working professionally as a guitarist (classical, jazz, rock), bassist (Latin, jazz, rock), commercial composer, and teacher since he was 19. He began his formal studies with Steve Vazquez at Harper College, where he performed with the Guitar Ensembles as well as the Jazz Big Band and Lab Bands. At Elmhurst College, he studied classical/jazz guitar with Steve Suvada and Frank Portolese, and composition with Jorge Sosa and Ken Haebich. Funding his education with scholarships and gig money, he graduated summa cum laude with a Bachelor's Degree in Music Theory and Composition in 2013. He has performed on guitar and bass with El Bandolero, Waxworks, and other Chicagoland artists.
A guitar, bass, piano, and ukulele instructor at El Rey since 2008, Nahum focuses on teaching technique and theory in a way that can be applied to the individual interests of the student, while exposing them to different artists and genres   *(Nahum has been mispronouncing his own name his entire life.) 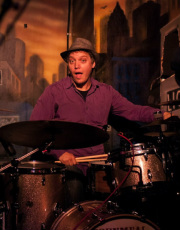 DREW LITTELL
Drew Littell is a Drummer/Percussionist/Teacher with over twenty years of playing and performing experience and 10 years of teaching experience. Drew has been teaching drums and percussion at El Rey since 2009. Lessons with Drew will have a heavy emphasis on technique, sight reading, and learning many different styles of drumset and percussion. Often lessons will include a jam session with Drew playing bass or percussions so the student can learn to play with and listen to other players in an ensemble. He also utilizes multi-media tools such as educational apps, websites, DVDs, and a large library of drum and percussion sheet music to submerge the student in many different viewpoints and teaching/playing styles.
Drew studied Jazz Performance at Columbia College Chicago and The Chicago College for the Performing Arts. He has privately studied with many great drummers including Paul Wertico, Ruben Alvarez, Tom Hipskind, and Kris Meyers. He has been playing since 1994.
Drew has gigged and toured with many great Chicago artists over the past years. He has been a member of many local bands including; Genome, Chicago Afrobeat Project, Nebulous, and many others. He has been a member as a percussionist of This Must Be The Band (Talking Heads tribute), Afro-Zep (Fela Kuti/Led Zeppelin Mashup), Chicago Afrobeat Project, the Gold Coast Allstars, the Liquid Beat Allstars, and Bill Smith. Since 2012, he has been the drummer of the nationally touring, festival favorite, Bluegrass-Jamband Cornmeal. You can hear Drew on the bandʼs latest release “Slow Street” (2015) as well as many live recordings. For more information, check out www.cornmealinthekitchen.com.
*(Korg has been calibrating its metronomes to Drew's groovy beats for years.)

DENISE CONRAD
Denise* has been teaching piano and guitar at El Rey for over 8 years. With a solid background in classical and jazz, she can teach a variety of styles of music, from Bach and Bartok to Katy Perry. She is also currently working towards her Bachelor's in Media and Communication from Northeastern University. *(Denise is a five-time recipient of the "Best Hair" award among the El Rey teachers.) 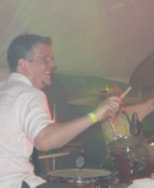 DAVID KUCHERA
David* is a multi-instrumentalist with 15 years teaching, and over 20 years of performing experience.  He graduated cum laude from Berklee College of Music, studying privately with some of the most influential names in the drumming world.  He has learned from Mike Mangini (Dream Theater), Terri Lyne Carrington (Herbie Hancock), Skip Hadden (Weather Report), Rod Morgenstein (Winger), and Larry Finn (Rent) -- to name several.
As an instructor, David values rudimental technique and groove versatility.  He challenges students to apply themselves creatively in any given musical situation, and to be well equipped with a working knowledge of every possible genre of drumming—with a flair for funk, R&B, Afro-Cuban/Brazilian, jazz, fusion, and progressive rock.  In addition to drum set, David also teaches concert, marching, and hand percussion.
You can see and hear David’s various musical exploits by way of youtube.com/caffeineadvocate
*(David plays the table/handbones in El Rey's impromptu jazz concerts in the lobby.)

DAN GIANARIS
After a few years of lessons at El Rey, Dan* went on to earn a Bachelor's Degree in Jazz Composition from the prestigious Berklee College of Music in 2013. His teachers there included Jon Damian, Mick Goodrick, Greg Osby, Ed Tomassi, Greg Hopkins, and George Garzone. In addition to teaching a variety of styles, Dan also helps coach the student bands at our Friday night rehearsals. *(Dan holds a weekly hula-hooping masterclass every Thursday at 6:47.) 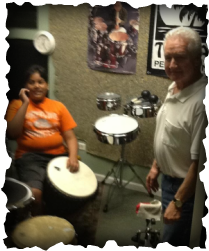 VERNE DUDDLES
Verne has many years of playing and teaching experience, and has been at El Rey since 2003. He has performed with various Jazz Lounge and Rock bands as well as Tahitian and Hawaiian percussion show bands.
The main focus in his lesson plans is to prepare students for the opportunities which will come their way in the future. This requires them to have a well-rounded background in a multitude of drumming styles including Jazz, Rock, Afro-Cuban, Funk, Latin and World drumming. To accomplish this, Verne offers techniques such as "Coordinated Independence," "Advanced Footwork" in odd and mixed time signatures, as well as left/right foot "Ostinato" accompaniment.
In addition to drumset styles, students are also offered hand and percussion drumming on Congas, Bongos, etc., using authentic rhythms in a multi-part ensemble setting. 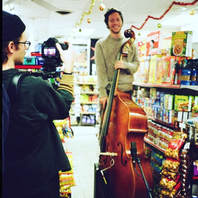 AL COSTIS
​Al has been performing live on guitar, bass, drums, and ukulele since the age of 5. In middle school, he learned to play trombone and trumpet, and participated in band projects across several genres. His musical education continued at the Berklee College of Music, where he graduated with a Bachelor's Degree in Jazz Composition. He has been a music instructor for over 10 years, and loves finding new ways to make a musical connection with his students.​